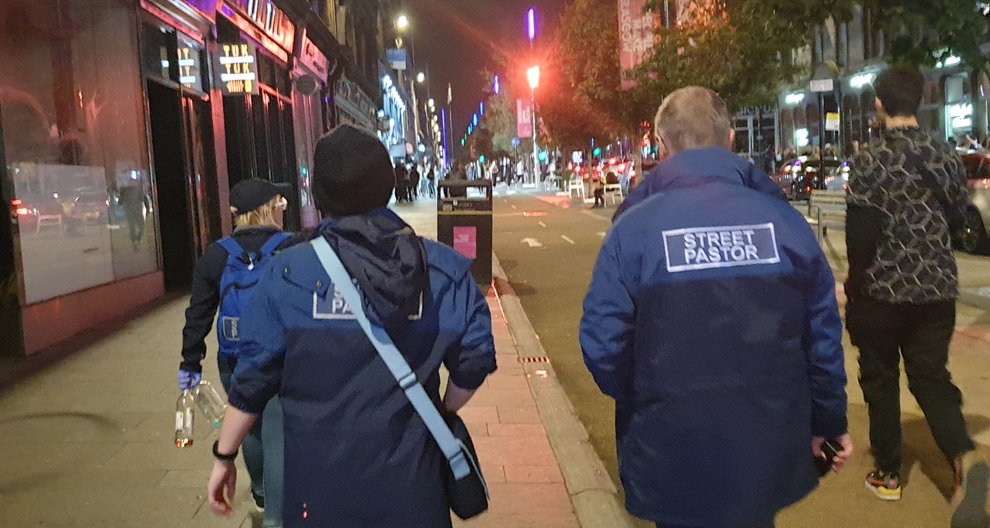 We spot a man laid out on some steps on Hope Street, head back, barely breathing, barely responding.

Glasgow Street Pastors coordinator Stuart Crawford sits down beside the man and attempts to get a reaction, pinching behind his ears. The man’s eyes are glazed, his breathing soft, and it is clear he needs more help than our four-person team can offer.

Stuart picks up his walkie talkie and calls for Glasgow Street Aid – another volunteer organisation, which provides first aid and support. The team arrive, rub their curled up fists over his chest – a feeling the man can’t ignore – and start asking him who he is and what he has taken. The man, now being held up by the Street Aid team, does not respond, looking confused.

The teams agree to send him to the ‘safe zone’ – St George’s Tron, the Street Pastors’ base and quiet space in Glasgow’s busy night life, where a team can offer more help – and arrange for a wheelchair to meet us halfway.

But, just seconds after starting to move him, a man rushes across the street and shouts that someone has cracked their head open at a bus stop. The first aid team hand us the confused-looking man. They dash across the street for their next emergency.

Volunteer Hannah Peyton (20) grabs one arm, I grab the other. We start leading him back to base. He’s compliant, and we even manage to learn his name. Soon he is back at base, in the care of the team there.

And our team is back on the streets to offer more help.

-Our small team is one of eight who would normally patrol the Glasgow streets on Friday and Saturday nights. Pre-Covid the teams would be 12-14 members in size, splitting into smaller groups. But Covid has meant that tonight, instead of 12-14 members, the team is just four – including me.

“We’re suffering badly from people not being able to go out because of their age profile and anxiety about being out in crowded spaces,” explained Stuart.

The members (around 157) do not work every weekend – usually it’s every four weeks – and cover different parts of Glasgow. Some work on the streets, others in the safe zone, while some ‘prayer pastors’ offer spiritual support from home. Those on the street are there to offer help and support, whether that is aiding someone who is worse for wear and struggling to get home, or lending a listening ear to a homeless person.

But, as Stuart explains, no night is ever the same.

“I was a school teacher for 20 something years,” he said. “I was 58, with two years to go before I could take my teachers’ pension, and thought to myself ‘do I want to keep marking time, doing what I’m doing, or move out and so something else?’. I handed in my notice, not knowing what I was going to do, but knowing that there was something I was meant to do. This role came up.

“I enjoy the encounters with people out on the streets.”

-The first hour, between 10.30-11.30pm, had not been so hectic. Glaswegians were queuing up outside bars and clubs, looking forward to a fun night ahead.

What was clear from the start was that this was no disjointed amateur operation. The Street Pastors work in harmony with local organisations and Police Scotland. As we left the building, Stuart called the CCTV office and the local police station to let them know the patrol was about to begin.

The first hour – covering Buchanan Street, Sauchiehall Street and the surrounding area – saw us disposing of glass bottles (potential weapons) and help one lass, a little worse for wear, who was in need of some sandals. Drink and high heels are not the best combination.

It also became clear that the Street Pastors had built up a positive reputation. Two young police officers stopped to have a chat with Stuart about the night ahead, while almost every bouncer gave him a quick ‘hi’ as he passed. These are relationships that have been built through shared experiences.

I use this time to learn more about Hannah and her sister, Sarah.

For them, helping out with the Glasgow Street Pastors is a family affair. Their grandad had been a member after hearing about the project from Stuart, and, upon turning 18, Hannah signed up to follow in his footsteps.

She has now been a member for over a year and a half (albeit with a big break in the middle due to Covid).

“As soon as I turned 18, it was something I really wanted to do,” Hannah said. “On my 18th birthday I came in to sign up. I’ve been doing it ever since and love it.

Hannah is a natural helper – she works as a carer and is working towards joining the police.

“I like looking out for people and making sure they are OK,” she explained. “I enjoy helping people, going out, and even being able to sit and talk to people who are homeless.

“I remember when I first started, I went out on observation and sat with him for a long chat. In the second half of the night I chatted to him again. Two weeks later I started college and I remember walking over to City of Glasgow College, and this guy came over and was like ‘Hannah, how are you?’.

“I feel like a lot of your life you are very busy. It made enough of an impact on that man’s life that he remembered me. I think that’s such a massive thing, and I love that.”

Her younger sister, Sarah, has also joined up, and is spending her second night out with the Glasgow Street Pastors.

-The second hour, from 11.30pm-12.30am, was less quiet. After dropping the man off at the safe zone, we head to Union Street. This stretch, between Central Station and the four corners, is, as Stuart sees it, the most active area for the Street Pastors – as I soon found out.

Two men start swinging at each other – throwing and missing punches with all the anger and accuracy alcohol provides. We back up, not wishing to get involved.

One lifts up his shirt, attempting to prove he is not carrying a knife; the other, backing up, is holding a glass bottle in one hand. While the latter backs off, slowly making his way up Union Street, the former rages – until Stuart catches his eye.

He soon calms down, trying to explain his actions, occasionally shouting a swear word in the general direction of his foe. Stuart, like a horse-whisperer for drunk men, keeps him calm and incident dissolves.

We manage just a few steps before the walkie talkie starts buzzing. Police are calling for our help outside the Cathouse, just metres away. We find two officers holding up a young man who has clearly had a good night out.

His sister has been called to pick him up. We just need to get him back to base. Surely a simple task?

Before we can start moving, the man erupts with vomit. It keeps pouring out of him, bouncing off the stone pavement – I’m soon regretting wearing canvas shoes.

Like before, Hannah holds him up on one side, I take the other.

As we move forward, he tilts back. As we move left, he tilts right. It becomes an annoying game – made worse by the fact that he towers over both of us.

As we reach the corner of Buchanan Street to begin our slow ascent back to base, the young man begins to push our arms off and thanks us for our assistance. He says he doesn’t need help (as he staggers back and wobbles) and that he’ll be fine. Stuart warns him that he has two options: the safe zone or the police. As Stuart begins to walk towards a parked up police van, the young man suddenly changes his mind.

He spends the next few minutes inviting me for a night out in Glasgow – or ‘his city’ as he calls it – and gives me tips on how to avoid paying full train ticket prices.

As we reach the half-way point, a volunteer turns up with a wheelchair. Once again, the young man insists he is fine and will recover. Thankfully, two friends turn up and persuade him to take the wheelchair option. He is soon back at base and on the road to recovery.

The Glasgow Street Pastors team – Stuart, Hannah and Sarah – head back out for another two hours, helping keep Glasgow safe at night.